For the last three years we are proud to have sponsored  Rhino Without Borders at their annual fundraising in Maun, Botswana. They do wonderful work for rhino conservation.

Here is what the Sponsors had to say about the 2019 event:

‘We are still on a high from the Rhino without borders function held last Friday. It was a huge success and as always we will not be able to host such an event without the support from our suppliers and for that we would like to say thank you…

This year we hosted 290 guests from Botswana, Zimbabwe and South Africa. The lot list went to the guests before the event with information of each item and the company who donated the item which allowed the guest to do research before the actual auction so they could pick their favourites they wanted to bid on. Your trunk was a favourite amongst the guest and our local Midas owner was the proud owner of the trunk at the end of the night.

We raised BWP1.5 million which was almost 3 times as much as the next highest amount we have raised over the five years of holding this event.

The intention is to use the funds to purchase two new Land Cruisers to assist our monitoring teams in the field at assist with the protection on these magnificent beasts. You can be assured that we will make every effort to do what we can to save this species.’

More about Rhino Without Borders 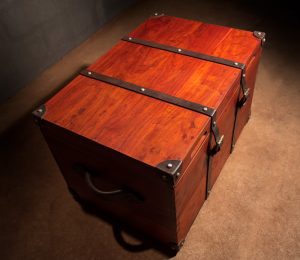 Rhino Without Borders is a joint initiative sponsored by Safari Companies Great Plains Conservation  and  andBeyond. The illegal trade in rhino horn has seen the numbers of these great beasts poached in Africa rise to astronomical levels. Since 2008 over 8000 rhinos have been poached in South Africa alone. On average, one rhino is killed every eight hours. Botswana is a relatively safe location for rhino because of its very low poaching problem as a result of its ‘no tolerance’ policy towards poaching threats. Rhino Without Borders have moved 87 rhino into Botswana and are now monitoring and protecting them. Once the drought in Botswana is over, a further 13 will be moved to reach their target of 100. Already 33 calves have been born – a great achievement for Rhinos Without Borders. We have given product for auction for three years now, and will continue to do so into the future. In 2017 we donated a pair of  Roorkhee Chair and an Expedition Folding Table. 2018 we gave a  Hemingway Field Bar  and in 2019 a Campaign Trunk.